All the other malls are doing it, and now the owner of Crossroads is planning to add a six-story mixed-use apartment building with 224 units, retail and parking.

It will follow two other recent residential projects on or near the 40-acre property.

Architect MG2 has submitted the early redevelopment plan for 15600 N.E. Eighth St. in East Bellevue. The 7.5-acre site is on the southeast corner of the mall, east of Bed Bath & Beyond.

The new L-shaped building will replace 377 surface parking stalls north of an existing building leased to Michaels (an art and hobby supply store), which will not be removed. 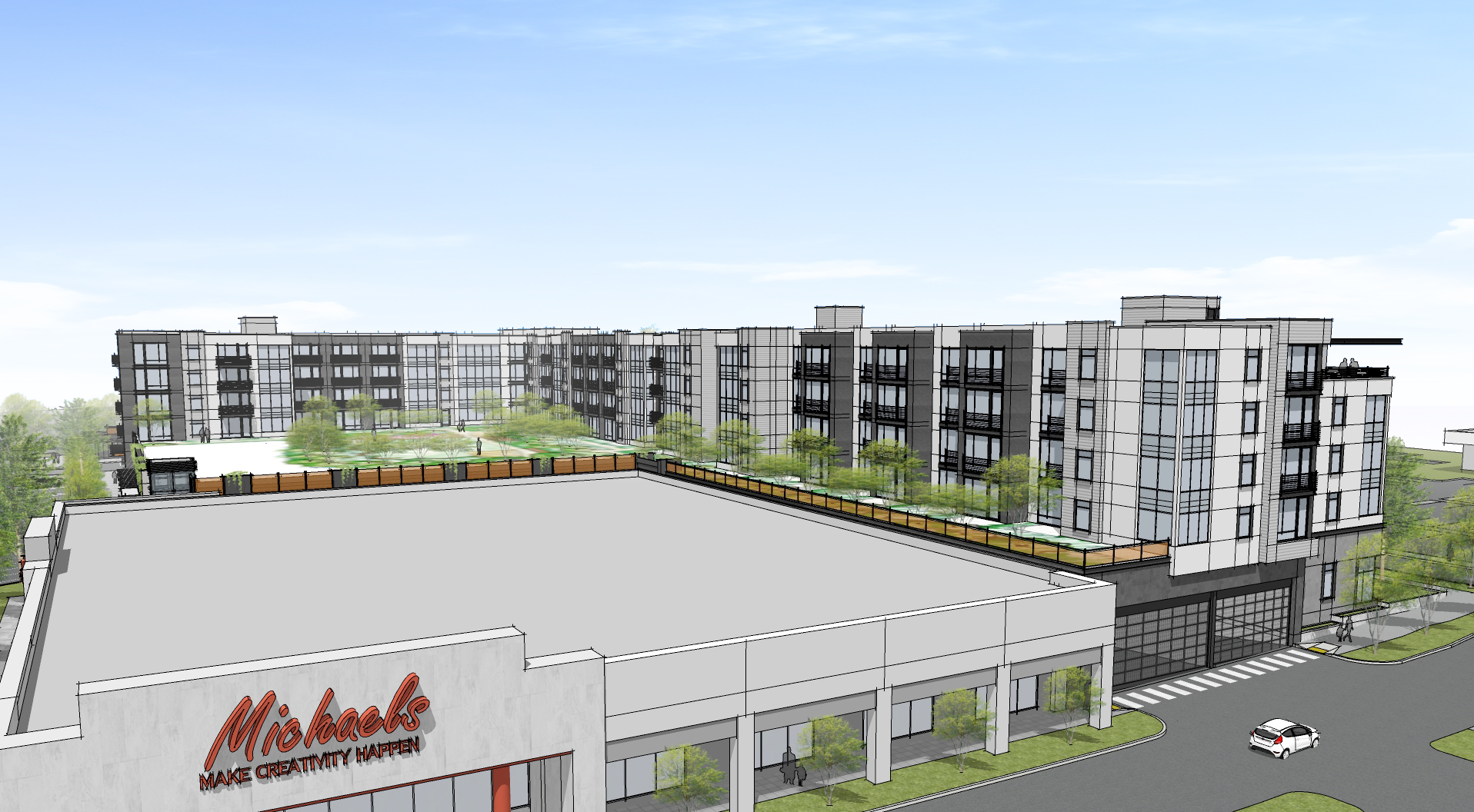 The new building will have 14,500 square feet of retail/commercial space facing west toward the main mall. Three levels of parking will be mostly structured, with 476 stalls for residents and shoppers. The parking entrance will be on the new building’s north side. There will also be 60 new surface stalls.

A large landscaped roof deck is planned, plus a central plaza atop the parking levels, which will total about 34,733 square feet. Pedestrian pass-throughs will serve both residents and shoppers.

All the apartments will be market-rate. Units will range from studios to two-bedrooms.

The new building will have about 388,380 square feet, including the parking.

The overall phased expansion project at Crossroads also includes a 15,000-square-foot public plaza south of the existing Stone Gardens climbing gym, which will have a 10,500-square-foot addition, and a separate new 1,000-square-foot commercial building.

MG2 says there will be a new pedestrian connector to Crossroads Community Center and Park to the east. Total project size is about 1.3 million square feet.

The project requires design review board approval. The city of Bellevue says that a SEPA determination of non-significance is expected.

MG2 says the mall owner hopes to break ground this year. No general contractor has been announced.

The mall was originally developed in 1962. It sold in the 1980s to companies related to developer Ron Sher, who was widely credited with its successful turnaround. Nine years ago, he sold a 49 percent interest for $12 million to ROIC of San Diego, aka Retail Opportunity Investment Corp., a REIT.

In 2013, ROIC paid $37.5 million for the rest, according to SEC filings. At some point in recent years, the property became simply Crossroads, not Crossroads Mall.

Crossroads’ other tenants include QFC, Sports Authority, Half Price Books and a King County branch library.

MG2 says the mall now has about 465,413 square feet of retail/commercial space. There are now about 2,274 surface parking stalls. After construction, there will be about 2,433 stalls.

If the plan proceeds, it wouldn’t be the first housing on or near the mall property. Polygon Northwest recently built 176 townhouse condominiums, plus some retail, immediately northeast of the mall. Upton at Crossroads Village covers almost 8 acres where the old Haggen grocery store (aka Top Foods) was demolished. That property was owned by a local family group, not ROIC.

And near the same corner, on mall property, SHAG is now building a six-story, 185-unit affordable housing community for seniors. (That’s north of the Regal Cinemas and south of Polygon’s development.)

Elsewhere in the region, housing is also replacing old, underutilized retail and parking lots at Northgate, the Village at Totem Lake and the Marketplace at Factoria.

*Published in the Seattle Daily Journal of Commerce; written by Brian Miller.