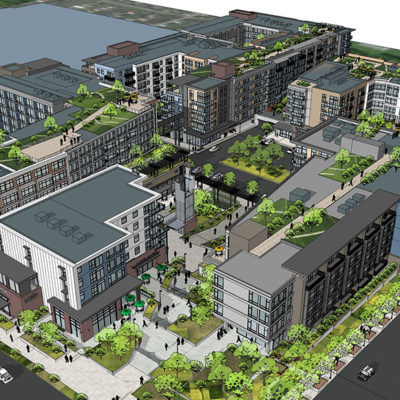 Madison Development Group and MG2 are planning a major mixed-use project with about 870 housing units over new retail on a nearly 7-acre shopping center in Kirkland.

The L-shaped property hasn’t traded in decades. It doesn’t include the separately owned U-Haul site on the corner of 120th Avenue Northeast.

The city says that 10 percent of the apartments will be affordable.

Parking for 1,049 vehicles would be on two levels below grade, plus 64 short-term surface stalls.

Total project size, including the parking, is about 1.3 million square feet.

The 6.9-acre property apparently went on the market two years ago, unpriced, offered by Nicholas Gill of Westlake Associates.

Zoning allows construction up to 67 feet. The seller is a California family.

Kirkland’s design review board began considering the project in June, with the most recent meeting this month. The project will also need SEPA review.

Kirkland-based Madison (aka MDG) has ample experience with mixed-use projects, though perhaps not on such a large scale. It’s currently developing 108 units over a new PCC at 2749 California Ave. S.W.

Past projects, also in West Seattle, include the 72-unit Element 42 and 184-unit Spruce. MDG also developed the 211-unit Excelsior on Capitol Hill.

Firm co-founder Tom Lee also had a role in the 237-unit Summit at Madison Park apartments, which has a Safeway and other retail. MDG also does retail and industrial development.

*Published in the Seattle Daily Journal of Commerce; written by Brian Miller.