The long-standing partnerships MG2 maintains with Span Construction and a select group of general contractors and professional consultants are unparalleled in the architecture industry. MG2 President Russ Hazzard highlighted these partnerships in his recent article about the importance of teamwork in delivering quality projects to our client, Costco Wholesale. Examing the matter further, what makes MG2’s working relationships so unique, and how do these relationships add value for the client?

The best way to answer these questions is by examining how Costco, MG2, Span Construction, general contractors and professional consultants work together during the pre-construction phase of a project. The optimal time to assess the cost of a project is early in its life cycle. That is why we start as far in advance as possible – sometimes years before breaking ground – to define a project’s scope, schedule and projected cost.

MG2’s ability to define scope and present design direction for a project allows the general contractor and Span Construction to compile relevant cost information, which in turn enables MG2 to assemble a thorough estimate of probable cost. This integrated approach to pre-construction services leads to a high-performance team, confident in its ability to deliver Costco accurate results.

The Budgeting Process: From Back-of-Envelope to Final Estimate

Every Costco project involving MG2, whether it’s a ground-up warehouse, remodel or addition, goes through a rigorous budget development process. The process typically begins with a historical look (rule-of-thumb) estimate we share with Costco to give them a big picture idea of the project’s estimated cost range. During this preliminary stage, we also look at the actual costs of similar scope projects to help us assemble a back-of-envelope pricing. This information allows Costco to better assess the project’s viability and make an initial go / no-go decision.

As the project moves forward, due diligence commences. It typically takes between one to four months to obtain the necessary soil reports, complete site investigations and conduct environmental assessments. During that time, MG2 proceeds with early design and preliminary civil drawings that will be used as the basis for the project budget. As more information becomes available, we are able to continuously improve our cost model. By collaborating with outside team members and consultants, MG2 is better able to help Costco make timely, critical decisions during feasibility and due diligence.

The Misperception of Letting the Fox into the
Hen House

A general contractor is initially assigned by Costco’s construction management team to work with MG2 on a project estimate. This is not an award of the project, but rather an opportunity to help build a budget alongside members of MG2’s internal Cost Management team. The general contractor helps establish a realistic budget, a task that can be extremely challenging due to the fluctuations in labor and material prices, especially on a regional level.

From an outsider’s perspective, it may appear that by allowing general contractors to perform cost estimates, MG2 is empowering them to set the construction number. That is definitely not the case. Engaging the contractor early actually helps MG2 confirm or refute our in-house numbers.

At this juncture, while the general contractor is working on an estimate, MG2’s Cost Management team is simultaneously working on a parallel track to pull together its own estimate based on historical data of similar projects, as well as its own analysis of the design and engineering drawings available.

During the pre-construction phase, MG2 serves as the “checks and balances” system to the general contractor. Our Cost Management team maintains and updates a cost database containing more than 20 years of completed project information to compare with our own estimated construction costs. The general contractor is aware of this, and as a result, is diligent in assembling an estimate that accurately reflects the cost of comparable work in that region based on their own experiences and those of local subcontractors.

When a particular city or area of the country is experiencing robust development, local subcontractors often incur higher labor and material costs. Such pricing deviations from national averages are reflected in project estimates. In a booming economy with numerous escalation factors to consider, it takes a tremendous amount of expertise and analysis to get the construction number dialed into a point where the team feels confident in the accuracy of the estimate. Pre-construction is both a science and an art. 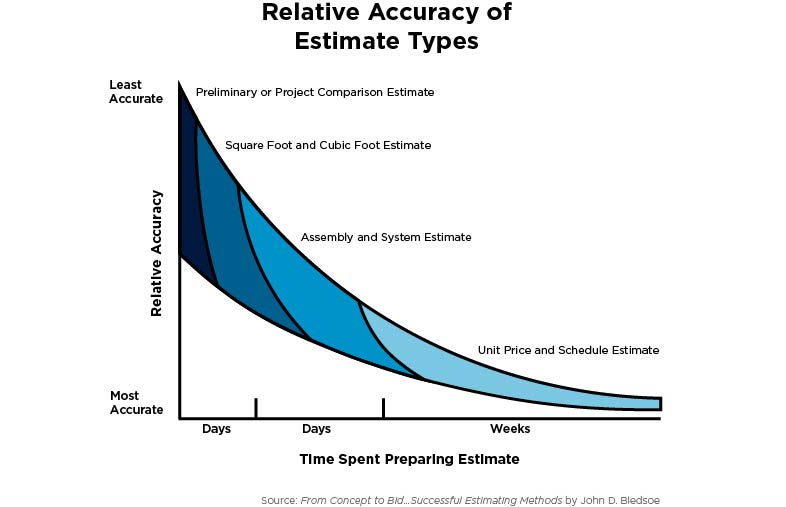 As the general contractor gains a better understanding of the project scope and begins to receive subcontractor input, they work with MG2’s cost management team to cross reference numbers, clarify scope and look for opportunities to eliminate excess costs, while still satisfying the project’s objectives. It is important to note that during this stage of the process, MG2 is not only collecting numbers, but actively analyzing the data to ensure there is alignment and consistency with recent projects.

I continually stress to our team the objective of this deliverable is not to provide Costco with data we’ve simply collected or researched. It is our job to look at what the data is telling us and offer the client insight into unique project factors that may impact construction costs. Every project is different, and the budget needs to reflect that.

As the final numbers are assembled, MG2’s estimate and the general contractor’s estimate are compared side by side for scope and completeness. We review the documents line by line and discuss any assumptions that may explain variances in the numbers. When there are discrepancies, we compare quantities and unit prices to determine the cause and make adjustments accordingly. 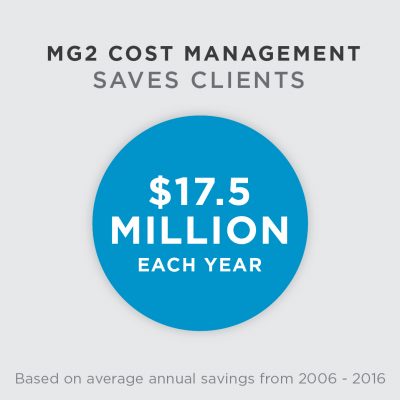 It can be argued this initial budgeting phase is the most important part of a project. Costco is relying heavily on the clarity of scope and thoroughness of the numbers. Having the general contractor and Span Construction working in tandem with MG2 allows us to have more conviction about the probable cost of construction. This is especially important in today’s volatile construction market where material and labor costs are in a constant state of flux. Currently, it is a strong subcontractor trade market and prices are reflecting that.

Trying to accurately forecast future construction costs often feels like shooting at a moving target. We have a great amount of detail about what has historically happened, but looking ahead remains increasingly challenging. By offering integrated cost information during pre-construction, the client is able to feel confident in our assessment of final construction costs and make informed decisions. This nontraditional approach is essential to the success of every Costco project and explains why MG2’s relationships with Costco and our general contractor partners are unlike any others in the industry.