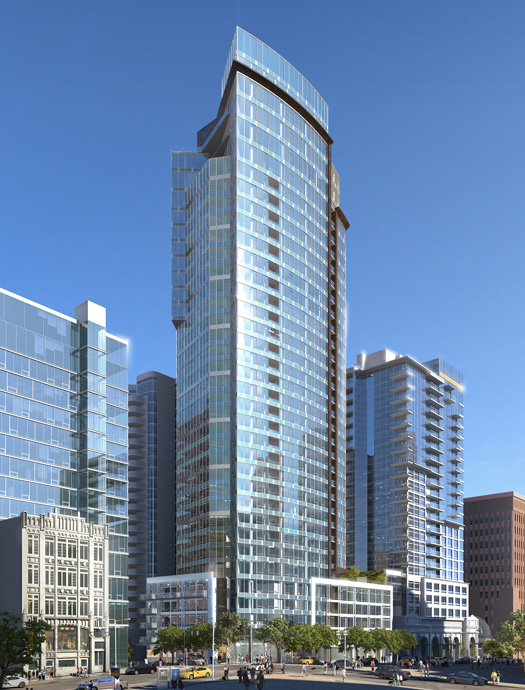 Continental Properties breaks ground on Tower 12, a high-rise apartment building in downtown Seattle for which MG2 is the architect of record.

On March 27, 2015, Continental Properties broke ground on the 34-story Tower 12 building in downtown Seattle. MG2 is the architect of record for Tower 12 and partnered with Continental Properties to provide a fresh perspective when the developer purchased the site originally planned for a mixed-use tower featuring condominiums.

After assessing the real estate market during the final design stages, MG2 and Continental Properties concluded that Tower 12 should instead feature apartments ranging from studio units to penthouse suites to meet the high rental demand in downtown Seattle. With this strategic change and other modifications to streamline processes, Continental Properties was able to maximize the leasable area and efficiency of the building’s core.

Tower 12’s design now offers a variety of features appealing to the city dweller, particularly the demographic of young professionals being drawn to Seattle’s thriving urban areas. Named in honor of the Seattle Seahawks and their ardent fans, Tower 12 boasts enviable walkability to sports stadiums, restaurants, and downtown office buildings and nearby retail. Many of the apartment units also offer iconic Seattle views of Pike Place Market and the Olympic Mountains and all residents will enjoy access to amenities such as an outdoor terrace and barbecue area, lounge and game room, media center, conference room, and exercise facilities.